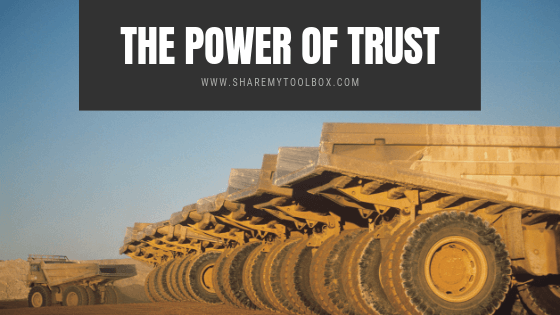 The Power of Trust

For contractors, losing trust can mean losing credibility and credibility is the thread that holds project teams together, so for that reason - it must be protected. Think of a project that failed and you’ll find a point where trust crumbled and the team deteriorated from a cohesive crew to a group of protective individuals. When trust is missing from the team equation, collaboration breaks down, motivation dwindles and progress loses steam, all because the respect that comes with trust, vanishes. An article published on popular career site, Mind Tools states, “A team without trust isn't really a team: it's just a group of individuals, working together, often making disappointing progress. It doesn't matter how capable or talented your people are, they may never reach their full potential if trust isn't present.”

The writer continues, explaining what to expect if trust IS part of the culture. “However, when trust is in place, each individual in the team becomes stronger, because he or she is part of an effective, cohesive group. When people trust one another, the group can achieve truly meaningful goals.”

It’s a simple fact - modern construction is a team sport and thus the rules of teams apply.

Trust on the Jobsite

There are a number of ways that trust can be built up or broken down on a construction job site. Much has been written about building trust through contracts, meeting protocol and technology platforms, yet there’s one area that’s often overlooked which has a major impact on the level of trust in a project team - tool accountability.

According to the National Equipment Registry (NER) in an article published by dig different, the loss of tools and equipment costs the construction industry over a billion dollars annually. The author writes, “When workers don’t have tools readily available, it decreases efficiency and potentially adds time for job completion. With many jobs, missing a deadline can mean penalties, fines and lost contracts.”

Tool loss is a big deal. That’s why the tool manager on a project has the unenviable job of keeping track of every power tool, tablet or drill that goes into the field. The toughest part of the job is addressing tool loss. This is where the trust can crumble quickly. If the wrong person is accused of losing or stealing a tool, the accusation alone breaks down trust.

On most job sites, when a tool goes missing the tool manager moves into ‘Private Eye’ mode, trying to find out who had it last. Once the questions and finger-pointing begin, he’s left with a team of people blaming someone else – or each other, causing a ripple effect that continues to grow. More often than not, no one is actually to blame. Most tool loss isn’t stealing, it’s the result of solid, responsible employees who have misplaced a tool or didn’t realize it was their responsibility to retrieve it.

On most projects, workers genuinely think they are on top of tool-use responsibilities, so it must be “someone else’s” fault. As the blame game begins to gain momentum, trust gets compromised and the team dynamic shifts. Then, productivity becomes effected and costs continue to rise because the tools need to be repurchased. Clearly, a better system is needed.

They say trust is earned, but once it’s lost, it’s difficult to get back. The truth is, if a company is still using sign out sheets for tool management, the chances of maintaining accurate accountability is notably at risk, so the wrong people could, and often do, get blamed. And if “lecturing and telling employees what to do begins, it implies that (the manager) doesn’t have faith in their decision-making abilities,” said Reliable Plant Online.

So when it comes to tool management in the field, what’s the best way to create trust through accountability? Let’s have a look at three proven steps.

The third step is where most construction teams fail and the trust is lost.  Sign-out lists or Excel spreadsheet “responsibility lists” have been tried by thousands of contractors but these documents are rarely kept updated, eventually becoming useless, since tools move from person to person in the field. As a reaction, companies will deploy command and control tactics such as not allowing tools to move from job to job without first being checked into the office. Trust begins to wear thin as tool managers utilize these tactics, because the tool users start resenting the intense scrutiny and restrictions there under when taking tools to a different job.

A tool system takes the plausible deniability out of the discussion. When responsibility is clearly defined, your guys will do a better job of keeping track of their tools. If held accountable in a tool sharing system, employees understand they have a problem to solve rather than transferring blame on to others. When blame-shifting begins breaking down trust between employees, it’s time to assign accountability and build trust through the use of a proven tool tracking system. Then, there can be no debate.

Using a modern tool tracking application that allows a person to accept and transfer responsibility in the field goes well beyond just building trust, however. It solves a fundamental problem at the heart of every construction project – keeping tools organized. With productivity at the crossroads of success and failure for any construction operations team, the impact of tool loss can be immediately felt. Having visibility into where tools are at all times leads to better efficiency, saves money and establishes accountability – which is the key attribute of trust.

Plus, if you’re like most construction companies, the last thing you need to be doing is chasing tools around – you’re already busy enough! You want to trust your guys to handle the responsibility of moving tools from where they are to where they’re needed.

Finally, with the complexity of completing a construction project on time and on budget, a little simplicity somewhere in the mix is a blessing! A simple app on the smartphone in your pocket or tablet in the warehouse can eliminate the headache of tool management while creating real trust across the team in the field.